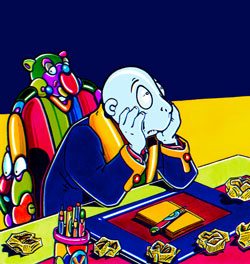 After troubleless secondary studies, he entered the ENAD in 1969 (Ecole Nationale des Arts Décoratifs) where he studied during five years.

In 1975, he began working as an illustrator and many books have been published by various publishers since that time.

In the meantime, he became a decorator-assistant for cinema and advertising productions.Besides, he was making murals.

Since 1984, he has been teaching plastics arts and illustration in several private schools of Nice.

His first exhibition, « Mises en Boites », at « La Galerie du Musée » in Nice, was not dedicated to the « YOUFO » yet, but to the « trompe-l’œil » technique.

The « YOUFO world » itself was created in 1996 and then, the first youfo creations were showed at the « FORUM » in Nice.

In June 2001, at the « Chantelivre » bookshop in Paris, on the dccasion of the « Youfo et le Vert de terre » publication (Lo Paîs, publishing house) originals statuettes and drawings were exhibited.

The Youfo creations then stayed three months in the Modern Art studio’s showcases of the MAMAC (Musée d’Art Moderne et d’Art Contemporain) in Nice. Since September 2007, the Youfo, now space-crafts, have left their imaginary world to blend in our reality, flying over earthly places.